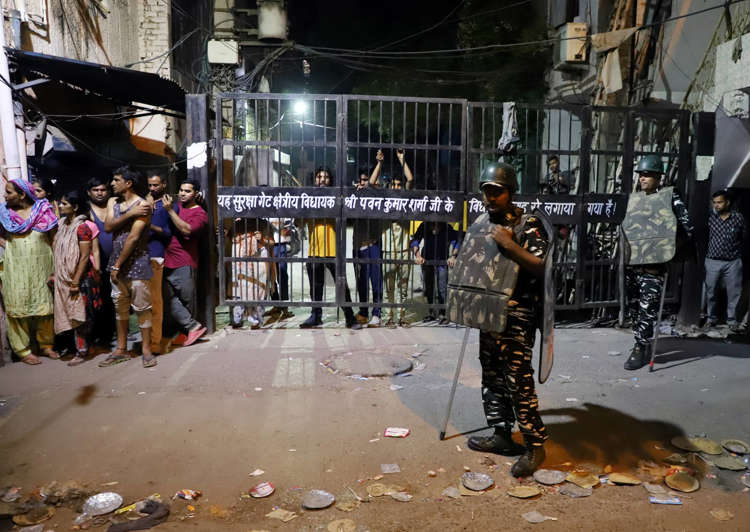 New Delhi – Following the incidents of religious fanatics attacking Shri Ramnavami processions in Muslim-majority areas in 6 States of the country, the processions of Shri Hanuman Jayanti were also attacked by religious fanatics in Uttarakhand, Delhi, and Andhra Pradesh on 16th April. Interestingly, it is alleged that illegal Bangladeshi immigrants were involved in the Jahangirpuri attacks in the capital Delhi. In Karnataka, religious fanatics vandalised a Hanuman temple over an offensive post on social media.

Stones pelted from the roof of a mosque in Delhi 1. At around 5.30 p.m. in Jahangirpuri, a local leader named Ansar got into an argument with Hindus while the Shri Hanuman Jayanti procession was passing near the mosque. The procession was then pelted with stones from the roof of the mosque. Due to this, the Hindus started fleeing while the religious fanatics chased them. The fanatics were carrying swords at that time. The video in this regard has been circulated on social media.

2. Police were fired at when they tried to stop the religious fanatics, stones were pelted as well. Eight Policemen were injured. Several vehicles were also torched during the violence.

3. Police have arrested 14 religious fanatics in this case. It includes Ansar, along with the shooter Aslam. Ironically, Ansar has several cases already registered against him. A pistol used for firing has been seized from Aslam. Currently, the situation here is tense but under control.

4. Strict action will be taken against the rioters, warned Delhi Police Commissioner Rakesh Asthana. The situation is now under control and more Police reinforcements have been deployed in other sensitive areas, including Jahangirpuri, he said.

Roorkee (Uttarakhand) – As the Shri Hanuman Jayanti procession passed through a Muslim-majority area, religious fanatics hurled stones at it. 10 people including Policemen were injured.

The procession was carried out by Bajrang Dal in Dada Jalalpur village. As the procession reached the Muslim-majority area of ​​the village, stones were hurled from the roofs of some houses. Due to this, the Hindus were taken aback. After that, the religious fanatics set fire to 2 vehicles. After this, the Police brought the situation under control by using force.

Kurnool (AP) – As the procession of Shri Hanuman Jayanti was passing by the mosque at Holagutha, a large number of stones were hurled at it by religious fanatics. 15 people were injured. Police have arrested 20 people in this case. The procession was organised by Vishva Hindu Parishad. Police had asked to stop the DJ while the procession passed the mosque. Accordingly, it was stopped while passing the mosque. (Why are Hindus forced to hear Azaan 5 times a day when the religious fanatics oppose the DJ in front of the mosque ? The Police, however, fall on the backfoot when they are told to take action against loudspeakers used for Azaan ! – Editor)

Stone-pelting at Hanuman Jayanti Shobha Yatra after procession passed near an Iftar gathering in a Mosque in Andhra Pradesh’s Kurnool https://t.co/vMoBSEq4yZ

After the procession passed a short distance from the mosque, the religious fanatics objected to the DJ being started and there was an argument. Stones were then hurled at the procession. After this, the Police beat up everyone with a lathi. Currently, a large number of Police personnel are deployed here. 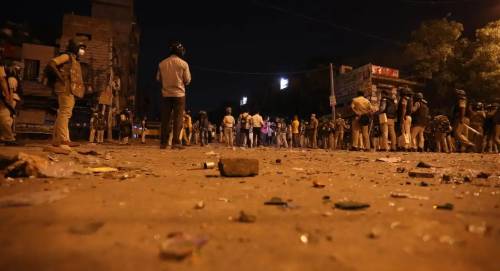 Hubballi (Karnataka) – In the old Hubballi, religious fanatics vandalised the Shri Hanuman temple over a post circulated on social media. They also attacked a hospital. The Old Hubballi Police Station was also attacked. Some Police officers were injured. A curfew has now been imposed in the area.

1. On the night of 16th April, a large number of religious fanatics had gathered outside the Old Hubballi Police station demanding action against a person who put an ‘objectionable social media post’. They also pelted stones. The Police had to exercise lathi-charge to control the situation and tear gas shells were used to disperse these fanatics.

2. Hubballi-Dharwad Police Commissioner Labhu Ram said, ’10 people have been arrested in connection with the violence. The person who circulated the objectionable post on social media has also been arrested. Twelve Police officers were injured in the attack and some of our vehicles were also damaged. Strict action will be taken against those responsible. Nobody will be spared’.