10th day of the Ukraine-Russia war 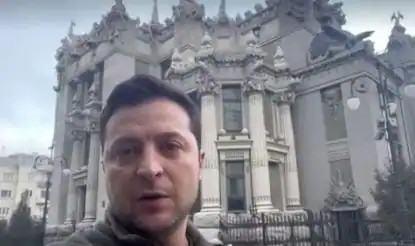 Kyiv (Ukraine) – On the 10th day of the war between Ukraine and Russia, Russia fired missiles at the Presidential Palace of Ukraine; however, it missed the target and fell at a distance from the Palace. Ukraine said, ‘Russia has missed its target once again’. Ukrainian President Zelenskyy said Putin must be stopped, otherwise, the whole of Europe would be destroyed.

Ukraine has claimed that 47 civilians have been killed in the Russian attack on the city of Zhytomyr.

Ukraine’s Defence Ministry said that Russia is constantly attacking military bases, as well as civilian areas. Russia fired missiles at residential buildings in the Ukrainian city of Mariupol. No one was in the building at the time of the incident. Russian forces have laid siege to the Ukrainian capital, Kyiv, as well as the cities of Kharkiv and Mariupol. The supply of essential commodities has been disrupted here. As a result, the problems of the stranded citizens have increased.

Russia has banned social media sites Facebook and Twitter. The ban was imposed because of anti-Russian content being published on them. There were 26 complaints against these two social media giants. Facebook, on the other hand, said in a statement that Russia’s decision would keep millions of people away from credible information.