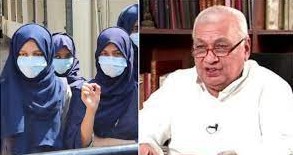 New Delhi – Those who are raising conflicts on the Hijab (the cloth to cover the neck of Islamic women) Issue, are constantly giving the reference of Shariat. According to Shariat, Muslims cannot stay in a country where the Shariat law isn’t implemented. In Islam, there are restrictions on a woman’s freedom of speech as well. The Shariat doesn’t give any right to women to raise their voice in public and hence, shouting ‘Allah hu Akbar’ in the college is considered to be an inappropriate act of the girl in Karnataka. The Governor of Kerala Arif Mohammad Khan gave a lesson in an interview given to a news channel that if someone wishes to follow Shariat, follow it completely or don’t ! After the students in the college in Karnataka expressed their protest against the girl wearing burqa lawfully, she started raising the slogans of ‘Allah hu Akbar’. Based on it, Arif Mohammad Khan gave the above response.

1. In Islam, as mentioned in books, wearing a hijab isn’t mandatory and hence, it can’t be compared with the hair, bracelets or the lancet of the Sikhs. Many people in the country are disappointed due to the ban on triple talaq and therefore, they are trying to create such conflicts. 2. Why don’t you check if the Muslim girls are getting proper education ? How many Muslim girls are going to school ? How many of them are selected for IAS or IPS ? The population of the country is 125 crores. Just a few women are speaking in favour of the hijab. By bringing them into light, one cannot claim their voice to be the voice of the nation.