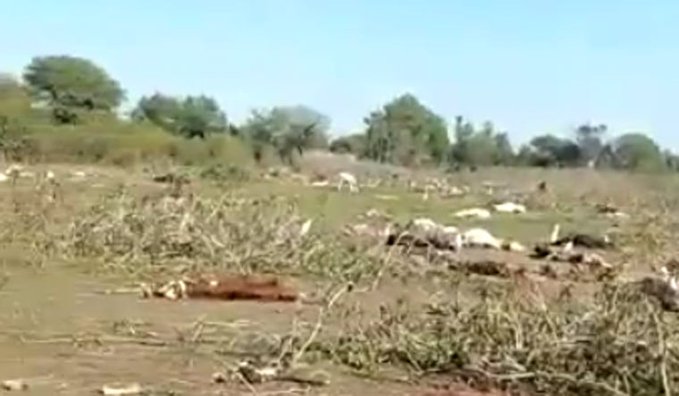 Bhopal (MP) – More than 100 cow carcasses and skeletons have been found near a cowshed in Berasiya village in Bhopal District. After receiving this information, some Hindu organisations staged a protest near the cowshed and demanded action against the manager of the cowshed.

Order to lodge a complaint against the manager of the cowshed !

Bhopal District Collector Avinash Lavaniya visited Berasiya village and conducted a detailed inspection of the spot, and ordered to lodge a complaint against Nirmala Shandilya, manager of the cowshed. Also, the District Executive Officer has been currently given the responsibility of running the cowshed.

Lavaniya said negligence has been evident in the disposal of cow carcasses. Cow carcasses are needed to be disposed of in a scientific manner; but instead of doing so, they were thrown out in the open. It is extremely inappropriate. An autopsy of cows that have died recently is being done.

Congress leader Digvijay Singh alleged that Nirmala Shandilya, manager of the cowshed, is a BJP leader. Cow bones and leather were traded in Shandilya’s cowshed in Bhopal District for many years. Singh has hence demanded that a complaint be lodged against her for slaughtering cows, an enquiry into the trade of cow bones, and a probe into the grants received by the cowshed in the last few years should be conducted.