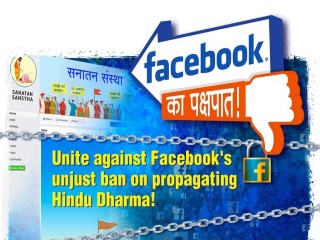 Mumbai – After the official Page – Facebook.com/HinduAdhiveshan of Hindu Janajagruti Samiti which has 14 lakh followers was suddenly blocked by Facebook on 27th April 2021 along with 35 District and State-level Pages promoting HJS’ work in the same period, HJS submitted a memorandum to the Union Minister for Home Affairs, Minister for Information and Broadcasting and Minister for Information Technology asking them to compel Facebook to unblock the Pages of HJS.

Facebook had also blocked Sanatan Prabhat’s Page, ‘Sanatan Shop’ Page, Hindi pages of HJS and Pages of ‘Forum For Hindu Awakening’ in the US. Facebook did not issue any notice or give any reason on the blocking either to HJS or Sanatan Prabhat.

The memorandum narrates the mission of HJS to serve the Nation and Dharma. HJS is a registered NGO working in India for the past 18 years all over the country on the aspects of Dharmashikshan (Education on Dharma), Dharmajagruti (Awakening on Dharma), Dharmarakshan (Protection of Dharma, Rashtrarakshan (Protection of the Nation) and social upliftment. For almost two decades, HJS has been relentlessly promoting Hindu Dharma and culture, awakening society to Spirituality, spiritual practice, culture and national duty. It is also fighting against social evils, corruption, etc. in a legal way. Therefore, society is moving towards morality and Dharmacharan (Abiding by Dharma) and leading a blissful life.

While thanking the Modi Government for forcing the foreign investors’ social networking sites such as Facebook, Twitter, etc. in India to abide by the Indian Constitution and laws, bringing a check on their increasing arrogance by legislating a new IT Law, HJS said that even then these foreign companies were favouring a particular ideology and discriminating in not giving equal treatment to all and were doing injustice to the majority in India.

HJS states that Facebook blocked its Pages which promote Indian culture, without giving any reason or notice. In India, the Courts too give the accused ample opportunity to submit his say before a judgement. Let alone giving HJS a chance to put up their say, Facebook has been blocking Pages without giving any reasons. HJS has not yet received any response from Facebook to the letter they wrote asking for the reason of this act.

In fact, there is no offensive material on HJS’ Facebook Pages. On the contrary, awareness is being spread about spiritual practice, Dharmacharan, etc., as well as spiritual research for attaining God-realisation. All these acts are constitutional. Facebook Pages of Editor-in-Chief of Sudarshan TV, Mr. Suresh Chavanke, BJP’s Telangana MLA T Raja Singh have been banned without any notice. All these dignitaries have expressed their outrage against Facebook.

On the other hand, 4 Pages of Dr. Zakir Naik of the ‘Islamic Research Foundation’, who was banned by the Government of India for numerous provocative speeches and inciting terrorism (including his organisation) are active. How can Facebook keep the Pages of terrorists active ? It is an unforgivable crime to actively help a banned terrorist organisation to operate through this medium. Likewise, the Facebook Page of Raza Academy in Bhiwandi (Thane District of Maharashtra), where two Policemen were burnt alive and a horrifying riot was incited in Mumbai is also active. The Facebook page of ‘Popular Front of India’, which has been carrying out destructive activities, inciting riots and killings across the country is active.The Facebook account of people like MIM MLA Akbaruddin Owaisi, who speaks the language of ‘killing 100 crore Hindus in 15 minutes’ is also active.

In many cases, while the Police and Courts have taken action against the culprits, why has Facebook not felt the need to block their Pages ? Is Facebook indirectly helping criminals ? This should be investigated because this is a serious matter for national security. Facebook Pages of only Hindu leaders, MLAs, Hindu organisations are being blocked. This suggests that Facebook is conspiring against a particular religion.

The memorandum also states that the Indian Constitution bestows freedom of thought and expression to everyone. No one has the right to take it away. Social media has become an important constituent today. It is appreciable that the Government is forcing these foreign social media to operate under Indian law. Although Facebook is a foreign private establishment, the Government should order it to operate impartially in India without any discrimination.

Facebook has 29 crore users in India, from whom it is doing business worth Rs. 1,277 crore, and making huge profits. Despite this, Facebook is against devout Hindu activists, organisations, media and leaders in India, deleting their posts, reducing the number of their followers, restricting their freedom of thought and thus influencing the public views politically. It is the duty of our Government to prevent this injustice and give equal justice to all and prevent foreign establishments like Facebook from operating arbitrarily in India.

The Central Government needs to intervene in this matter and hold Facebook accountable for safeguarding the freedom of thought and values of the Constitution. HJS has requested that strict provisions be made in this regard in the new IT laws related to social media. HJS has demanded that the Government of India compel Facebook to immediately lift the unjust blocking of its Facebook Pages.