A ‘Cow Protection Bill’ is likely to be presented in the upcoming Assembly session in Assam !

Hindus feel that instead of the State Chief Ministers saying this and framing laws for it, the Central Government should frame such laws for the entire country ! 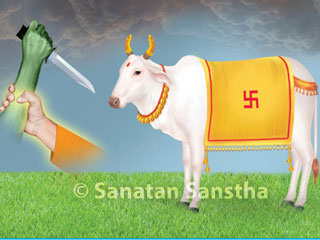 Guwahati (Assam) – “Cow is our mother. We will not allow cows to be smuggled in from Bengal. Those places where cows are worshipped, beef must not be consumed. It does not mean that everybody has to give up and change habits all of a sudden”, said CM Himanta Biswa Sarma. He also said that Darul Uloom of Lucknow has mentioned several times that beef should not be consumed in places where Hindus live. The CM spoke on the proposed ‘Cow Protection Bill’ on the final day of his first assembly session after becoming Chief Minister of Assam. He also assured to strive for the safety of the cows in the State. There is a possibility of a ‘Cow Protection Bill’ to be presented and passed in the upcoming Assembly session in Assam.

Criticising the move, opposition AIUDF leader said that this bill would motivate incidents like mob lynching, as seen in North India. During the discussion after the Governor’s speech in the Legislative Assembly the opposition ‘AIUDF’ also questioned the Government why any such bill were not introduced in Goa, Mizoram or Meghalaya where the BJP or its alliance are in power.