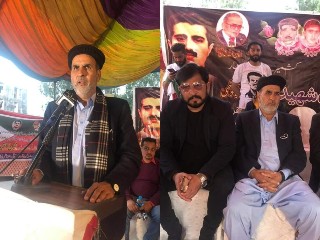 Pronouncement of all political parties of Pakistan-occupied-Kashmir (PoK)

India should keep ‘Gandhigiri’ aside and take control over PoK.

Kotli (Pak-occupied-Kashmir) – Leaders of all political parties in Pakistan-occupied-Kashmir declared that they do not want to remain in Pakistan but want to merge with India. An all-party meet video from a common platform is circulating on social media nowadays wherein the leaders are seen proclaiming this. The video is dated 11th  February and is in circulation since last month.  Pakistan was widely condemned in this meeting. Prime Minister Imran Khan had addressed a gathering a few days back at the same place where this meeting took place.

1. Jammu and Kashmir Liberation Front (JKLF) leader Dr Tauqeer Gilani while addressing the gathering said that the people were so dejected by Pakistan that after the abolition of article 370 from Kashmir on 5th August 2019, they decided to stay with India. Likewise even PoK wants to merge with India and not accept any partition.

2. Another US-based leader of JKLF said that they were not deprived of freedom because of India, but because of Pakistan.  It was not India, but Pakistan that has taken away their freedom. India is actually obliged to help them in their freedom struggle.