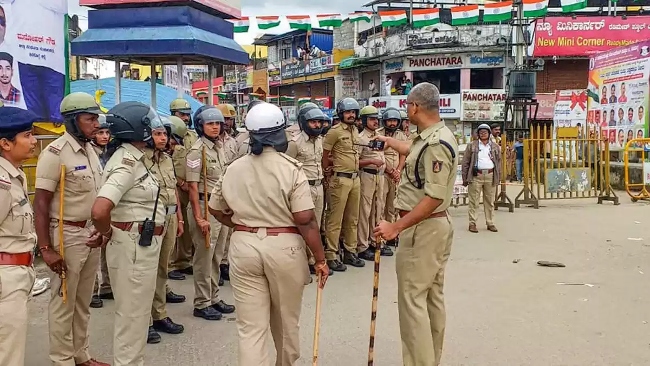 Shivamogga (Karnataka) – On Independence Day, i.e. 15th August, two Hindu youths were attacked by religious fanatics with knives due to a dispute over the removal of the poster of Swatantryaveer Savarkar and the installation of Tipu Sultan’s poster in Shivamogga, Karnataka. The religious fanatics then fled the spot. Prem Singh (age 20) and Praveen (age 27) were seriously injured in the conflict. After this incident, the Police imposed a curfew in the city. 4 people have been arrested in this case. While trying to catch one of them, he tried to attack the Police. The Police then shot him in the leg. He was injured in this. Two of the arrested have been identified as Nadeem (age 25) and Abdul Rehman (age 25). After the incident, Karnataka Chief Minister Basavaraj Bommai directed Home Minister Araga Gyanendra to visit the spot and monitor the situation.

1. At Amir Ahmed Circle in the city, pro-Hindu organisations had put up a poster of Swatantryaveer Savarkar. After some time, some religious fanatic youths reached there with the poster of Tipu Sultan and tried to remove Savarkar’s poster. This led to a heated argument between the Hindus and the religious fanatic youths. The Police who were present at the spot first brought the situation under control with lathi’s charge, then removed Savarkar’s posters from all the intersections around.

2. The activists of the Hindu organisation sat on the streets to protest against the removal of Savarkar’s posters. Owing to the rising tension in the area, the Police immediately imposed Section 144 (prohibition of the assembly of four or more people) in Shivamogga town and deployed a heavy Police force in the area. Along with this, the Police have also removed the posters bearing Savarkar’s name at Suratkal Crossroads in Mangaluru. After some time, fanatics attacked Prem Singh and Praveen at some distance.

If Hindus are awakened, such an incident will not happen again ! : Local BJP MLA Eshwarappa

#WATCH | I request senior members of Muslim community to take action against youth of their community involved in such anti-national activities. If Hindu society rises, then such activities won’t survive: BJP MLA from Shivamogga,KS Eashwarappa on stabbing incident#Karnataka pic.twitter.com/hUSuQx2xld

Responding to the matter, BJP MLA and former minister Eshwarappa from Shivamogga said, ‘A Hindu youth was stabbed by these people (religious fanatics) while he was shutting the shop. There is anger among the citizens of Shivamogga due to this. I appeal to the elders of their community that your youths are carrying out anti-national activities. You should speak on it otherwise the Hindu community and the Police department know very well how to teach them a lesson and we will teach it when the time comes. If the Hindu community is awakened, there will be no anti-national activities. Prime Minister Narendra Modi has said that everyone should remain in harmony. Hindus and Muslims should live in peace and we are following it; but who is involved in hooliganism ? Police will do what should be done to them’.