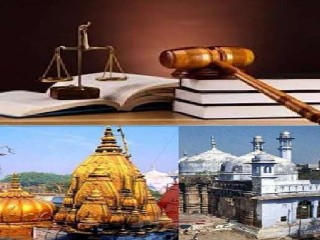 Varanasi (UP) – Survey and video shooting of Gyanvapi mosque and Shrungar Gauri temple are going to be held on the basis of the Civil Court’s order. The survey and video shooting of some parts has been done. This was done in the presence of the Court Commissioner by videographer Vibhash Dubey who, while talking to the Channel ‘Aaj Tak’, claimed that he saw ancient bells and strings of flowers on the walls of the Gyanvapi mosque and 2 swastika also. The snake of Shri Vishnu on Sheshnag was also seen along with a lotus, under the Shrungar Gauri temple.

Videographer Vibhash Dubey said that the survey work had started from the north and west, the news about scratching to remove evidence was wrong, only the dust was removed for recording.

We had no opposition on 6th May, Dubey said; but around 100 people had gathered there on the next day when we had arrived there. They were shouting slogans and more than 100 people opposed us. The Court Commissioner told them to let us go in, but the Muslim advocates present there did not say a word.