The pot calling the kettle black! The fact is that the terrorists in Pakistan have become headstrong. The blasts are orchestrated by Pakistan itself to control these terrorists. The entire world is well aware of Pakistan’s ridiculous attempt to blame India for the explosions. 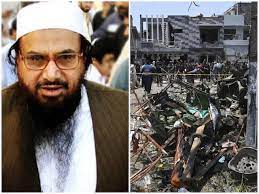 Islamabad (Pakistan) – Pakistan has accused India of orchestrating the bomb blast outside the residence of Hafiz Saeed, the mastermind of the Mumbai terrorist attack. Imran Khan tweeted, “planning and financing of this heinous terror attack have links to Indian sponsorship of terrorism against Pak. Global community must mobilise institutions against this rogue behaviour”.

Moeed Yousuf, the National Security Advisor of Pakistan has accused, ‘the mastermind behind this attack is an agent of India’s RAW intelligence agency. The day the blast took place, there were thousands of coordinated cyberattacks on the country’s information infrastructure. The cyber attacks were carried out to hamper the investigation and destroy the evidence’. Three people died and 17 were injured in this bomb explosion.