1. Importance of wearing a mangalsutra

Mangalsutra is a medium of binding a husband and wife in a lifelong bond of marriage. The words ‘Mangal’ and ‘Sutra’ together imply that ‘This sutra is mangalkari (Auspicious)’, hence the name.

A. The mangalsutra continuously makes a woman aware of her duties, responsibilities and rules. This way, she is helped in avoiding adulterous behaviour, remaining within limits, and thus abiding by Dharma (Righteousness).

B. Realisation that a woman who wears a mangalsutra is married, and she should be given due respect, is also an objective of the mangalsutra. Thus, the mangalsutra was created to restrain and control the unbridled behaviour of society.

C. The mangalsutra is a symbol of the bond of union between Shiva (Husband) and Shakti (Wife). In this, the gold itself symbolises Shakti (Divine Energy), while the intricate weave that ties the black beads symbolises the God Principle (Shiva).

D. The mangalsutra has two small cups. The specific shape of the cups facilitates creation of attraction waves in their void. Hence, when compared with any other jewellery, the Divine Principle is attracted towards the mangalsutra in highest proportion.

E. The mangalsutra placed around a woman’s neck is the Shakti bond. Note : Everything that happens in the Universe, be it tangible or intangible (Subtle – that which is beyond the comprehension of the five senses, mind and intellect), requires some energy.

3. Factors that decide
the sattvikata of a mangalsutra 3A. Length : Ideally, the length of the mangalsutra should be such that it reaches the woman’s Anahat-chakra (Heart chakra), that is, middle of the chest. When a married woman wears a mangalsutra, the Chaitanya (Divine consciousness) that gets emitted from it enters her Anahat-chakra and through it, enters her body. Hence, her body becomes pure and there is an increase in Sattva-predominant (Sattvik) thoughts of ‘Abiding by Dharma in daily life’, that is, Dharmacharan. She becomes aware of her duties and responsibilities in marriage and is able to abide by conjugal fidelity or ‘Pativrata Dharma’ properly.

3B. Cups : These days, mangalsutras with various trendy designs of ‘cups’ are available in stores to suit the likes of modern women. However, from the spiritual perspective, it is best that the cups be spherical and without any design on its surface. Following are the reasons for this. 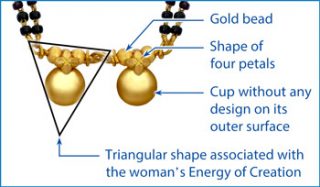 1. The spherical shape is associated with ‘Zero’, that is, Brahman (God-Principle). Hence, its ability to imbibe and emit waves of various requisite tattvas (Principles) as per the need of the woman is higher than that of any other shape.

2. The plain surface (with no design) of the cups and the beads of the mangalsutra do not obstruct the ability of the gold to imbibe and emit Tejtattva and Chaitanya from the Universe. It also contains higher proportion of Sagun-nirgun (Manifest-unmanifest) Principle. Hence, the woman is able to get spiritual benefit for a longer period, which keeps her protected from the attacks of the subtle negative energies that intend to cause her harm.

3. Each cup is connected with two gold beads on both sides with a flower with four petals in between. The four beads signify the 4 Purusharthas – Dharma, Artha, Kama and Moksha and the 2 cups signify Shiva and Shakti.

4. The design of the flower with four petals in-between the beads enables swift emission of Kriya-shakti vibrations through the petal tips. This helps in creating a protective sheath around the Anahat-chakra. These Kriya-shakti vibrations concentrate in the spherical beads around the flower and are capable of acting according to the need of the woman. This arrangement of the mangalsutra is highly effective in attracting the sagun Principle.

5. One cup, the two beads above it and the four-petalled flower joining them create a traingular shape. This shape is associated with the Energy of Creation in the woman. This keeps the capacity of creation active in the woman. Thus the ‘loving’ aspect of the woman is maintained. 3C 2. The shape created in one segment of the two strings of black beads is rectangular and attracts the waves of Ichha-shakti. This shakti helps carry out the woman’s tasks in worldly life and fulfils her desires.

3C 4. A quadrangular design compri-sing four gold beads connects any 2 sections. The radiant quadrangle so created stores within its void the Kriya-shakti of the Universe in a concentrated form. This keeps the Shakti Principle in the woman constantly activated and protects her from the attacks of negative energies.

3D. Oval shape in the center of the mangalsutra : The oval shape created in the middle of the circular formation of the mangalsutra helps the woman imbibe Kriya-shakti in an inactive form. This shape performs the task of awakening the Sushumna-nadi in her and helps the prakruti in the form of woman to unite with the Shiva Principle in the form of man, and thus aids in the woman’s spiritual growth.

4. Spiritual benefits of a sattvik mangalsutra

At the Maharshi Adhyatma Vishwavidyalay, we have a team of researchers who have an advanced sixth sense. They can perceive in the subtle and draw accordingly. The pictures are then verified and corrected by Paratpar Guru (Dr) Athavale, the founder. Then, a digital version of the pictures is prepared. We have presented a few such digital pictures of various jewellery in some of the earlier issues of this Periodical.

5. Spiritual benefits of wearing a Kanthamani

Kanthamani, also called ‘muhurtamani’, is a single string of black beads woven in a cotton thread with a single plain spherical gold bead in the middle. It is worn around the Vishuddha-chakra along with the gold mangalsutra (which is worn upto the Anahat-chakra). The Kanthamani keeps the Vishuddha-chakra activated constantly because of the Tejtattva that is attracted from the Universe towards the gold bead.

6. Spiritual benefits of sleeping while wearing a mangalsutra

Some women find it relaxing to remove all jewellery, including mangalsutra before going to bed. However, from a spiritual standpoint, it is harmful. As is apparent from the points discussed above, a mangalsutra protects a woman from attacks of subtle negative energies. 7. Spiritual root cause why can a mangalsutra break

We often see our jewellery breaking or becoming black or getting lost. This could be due to spiritual causes. We have covered some spiritual root causes for unexplained damage to one’s jewellery and steps of spiritual purification in our earlier Issues.

However, when it comes to unexplained breaking of a mangalsutra, negative energies have a role in almost 50% of the cases. A mangalsutra is a ‘Soubhayalankar’, a jewellery associated with the woman’s soubhagya, that is, the husband. Hence, distress faced by the husband due to spiritual root causes can be noticed on the mangalsutra. The actual cause can be perceived only through advanced sixth sense.

However, in every instance of unexplained damage to a mangalsutra, we can pray – O’ God ! Please protect my husband and me from the attacks of subtle negative energies.

8. Wearing a gold chain
instead of a mangalsutra

In some regions of India, women wear a gold chain as a substitute for mangalsutra. A sattvik gold chain has its own subtle benefits. However, the mangalsutra is more beneficial in the case of married women.

The specific pattern of a sattvik mangalsutra awakens the Shaktitattva (Divine Energy Principle) in the woman. The black beads strung in gold wire attract the distressing energies and Raja-Tama components from the woman and the environment. The gold beads and the gold wire eliminate such non-desirable components (Please see Point 6 too). This is akin to wearing a talisman around the neck. The black string of the talisman attracts the distressing energies, and the vibhuti in the talisman eliminates them. In the mangalsutra, the task of the black string is performed by the black beads and that of vibhuti by the gold. Hence, the protection is higher for a woman. Since the attacks of negative energies are absorbed by the mangalsutra, the woman’s body remains protected.

9. A mangalsutra is not
a piece of fashion jewellery A sattvik gold chain has its own subtle benefits. However, the mangalsutra is more beneficial in the case of married women !